Now to settle in an start a project list. 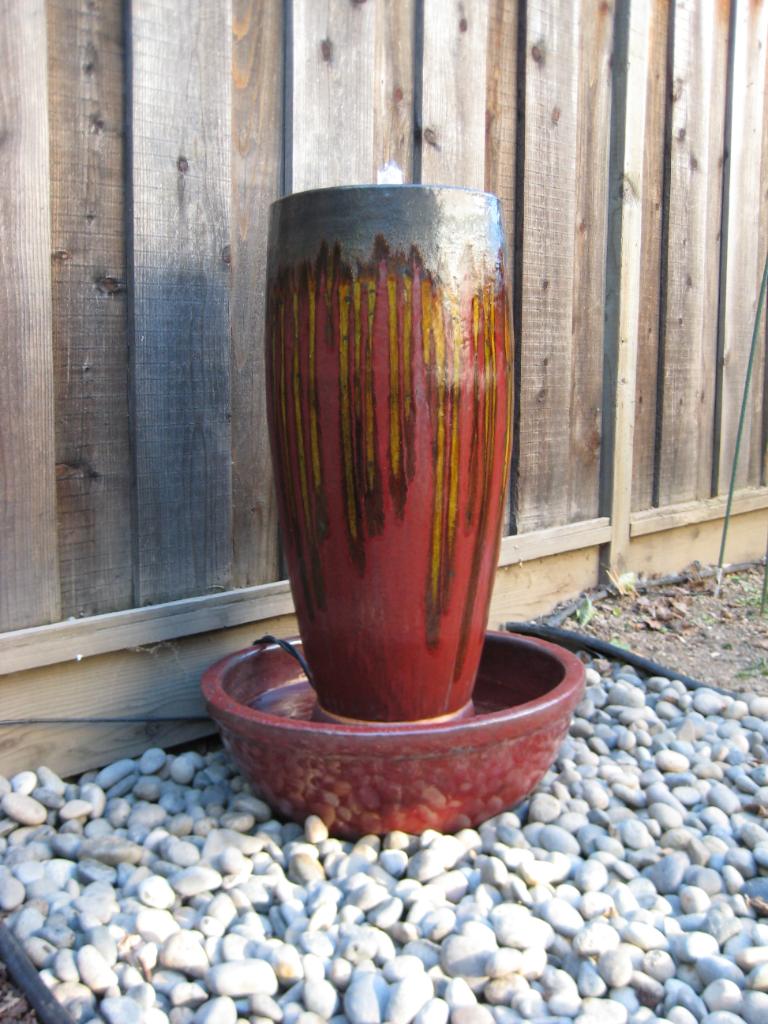 The fountain we made during our backyard project bit the dust last weekend!

Apparently when we picked the vase we used we didn’t think about the corrosive affects of water. The old fountain was starting to have the color wear off in many spots. Add to that the moss that was growing on it, the handle that I broke off (trying to scare a squirrel by throwing a rock at it), the fact that water only ran down one side because the ground sunk unevenly, and the leak in the reservoir – it was time to retire it!

We found a lovely new fountain at Target and didn’t have to do anything (more than assembly) to it. Oh wait, Scott built a leveling platform for it so that when the ground eventually sinks beneath it, we can re-level it so the water runs down evenly again!

I wish it was a bit taller, but really do think it is lovely!

This weekend we have made “progress” on the house.
We:
1) Had a tile contractor come in to give us an estimate for tiling the kitchen counter.
2) Scott painted the interior doors (all of the downstairs and most of the upstairs)
3) Replaced the interior door hardware to match the locking doors and each other. The previous owner had totally random knobs, most of which were damaged.

Now we just need to actually get the quote from the contractor to see if the kitchen remodel continues or dies a slow death. Cross your fingers.

It is amazing to me how small touches make a huge difference. Although I am sure most people visiting our place wouldn’t notice until we told them, but having uniform door knobs makes me happy. 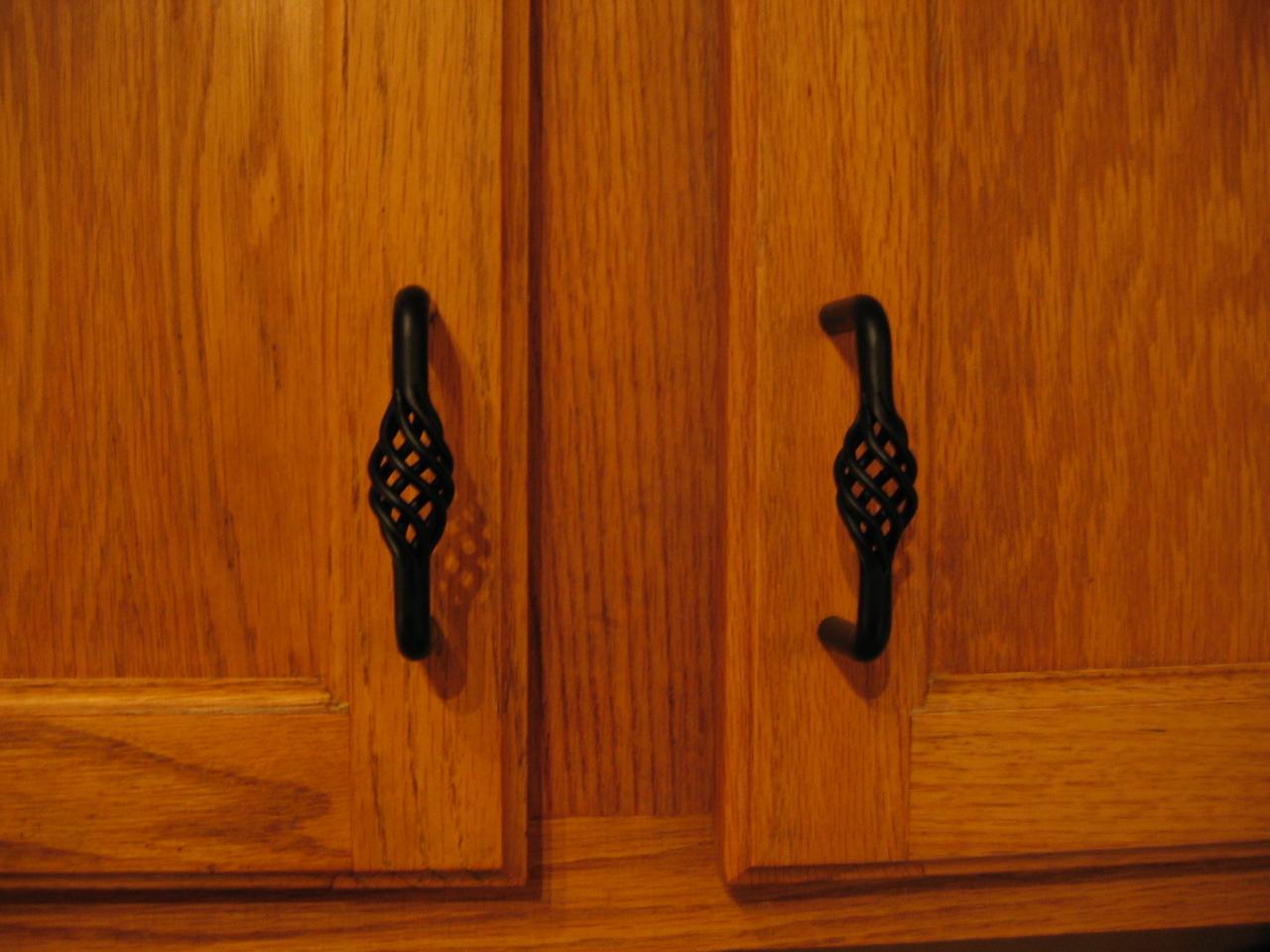 We have decided that our next project on the townhouse will be to fix up the kitchen. After some experimentation, we think the cabinents are saveble and just need a good DEEP clean, plus some new hardware. So that is what we did this weekend. All the top cabinents now have new hinges and pulls (which they didn’t have before)

I think they look great (thanks Scott).

Next up is cleaning the bottom cabinents (yucky!) and deciding on who is going to install the new counter top/sink etc. I have already decided what tile I want to use on the counter and backsplash, now I just have to find someone who has it and will install it. I also need to figure out if I want to raise the counter surface between the kitchen and the dinning room to make it more like a breakfast bar area. Mostly it is a matter of cost and difficulty. I hope it isn’t too expensive.

Well I have been remiss about posting our progress on the landscaping project!

We are SO close to being done, but of course that means that we have slowed down our frantic pace!

To summarize the progress since the last actual post – we have
* Completed the sandbox with cover
* Planted the veggie & herb garden with drip system
* Engineered, broken and fixed a water fountain
* Run electrical so that said founatin will work
* Planted morning glories next to fountain in contrasting pots
* Installed sprinkler system
* Brought in 2.5 MDX loads of dirt to level the lawn area
* Sold our old shed and found a new smaller one
* Roto-tilled and then compacted the lawn area
* Laid sod
* Completed all but the top stair
* Edged the yard with 900+ lbs of river rock
* Assembled our new grill (it’s blue – So cool)
* Killed a small wasp next that was forming in our fence

Not bad for two people.

Well it has been 6 trips to Home Depot for bricks and misc other items over two plus weeks, but the wall is FINALLY finished. Now we just need dirt, soil, sand, plants, sod, etc and we will be completely done, but I get ahead of myself

We have been putting time in on weekday evenings and weekends. We are both exhausted.

We were really blessed that Jeff and Ruthie Kolb came to help us last weekend with the manual labor (thanks again guys – you were a huge help). We even relaxed after with pizza and margaritas – the best part of the whole day . . .

More pictures of the progress

So we didn’t go away for a weekend of rest and relaxation (see previous post) – instead we put in 3 days of hard labor on our backyard.
Here is the before picture

As you can see not much going beauty going on . . .

We first removed the deck (well removed in the sense of cutting up the wood and putting it in a pile under the window); then we dug up the deck footing (15 LARGE concreate boulders about 100lb each) during which we broke our shovel – oh darn; That was it for DAY 1

Day 2 started with a trip to home depot to get a shovel; then we dug out the sloped dirt in the back; followed by pondering the actual desgin plan and possible materials (we had an idea of what we wanted, but it has changed since work began – only slightly). We took a trip to Lowes to comparison shop (while there we found the over stair light that I want, but that is a side note) and rested in the afternoon.

Day 3 – another trip to Home Depot for almost 2 hours. We ended up with 3 carts loads including garden bricks, 180lbs of sand and various tools to begin constructing a retaining wall (to stop the sloping dirt in the back). Back home to dig install part of the eventual watering system (which had to go in before the wall went over it); dig a trench for the footing of the wall AND laying the first course of brick (the hardest course to set level etc.)

Scott and I are sore and tired after all our work, but it is starting to pay off

With the exception that I probably would have called in sick today had I been working – I don’t think that I have fully realized that I am officially unemployed.

This is bizarre – I haven’t been without a job (or 2) since I was 17 years old and in college.

I guess it will take more then one day at home for the reality to sink in . . .

Well I did it! I am officially unemployed. I hate quiting/resigning/etc. I always feel like a am letting someone down.