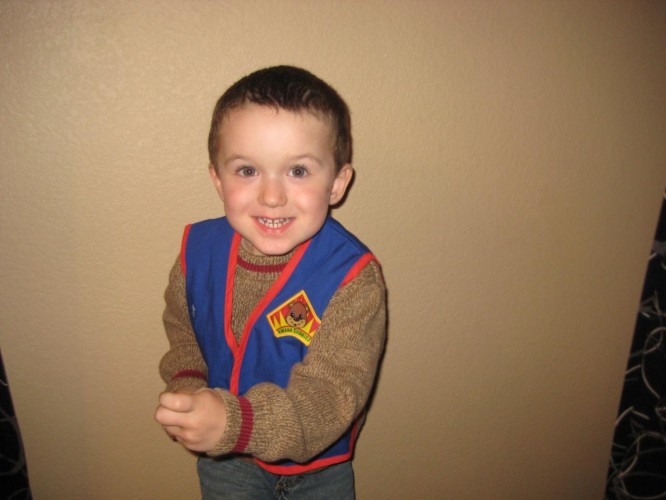 This month we started Chanler in Awana. We tried one church near to our house and were disappointed (they were trying to get 3 year olds to do nothing, but sit, listen and be quiet for most of the 2 hour club), so we tried the program that both Scott and I were involved in during high school at Valley Church. What a difference! This progam was organized, had fun activites for the kids and Chanelr LOVED it. He loved it so much that when I walked in to pick him up he came running over and started to cry because he wanted me to buy him a Cubbies vest and book.

He had already memorized the Cubbies key verse, motto and 2 additional verses from the first time visitor packet, so we got the a vest, bag, book, etc. He pretty much wants to wear the vest all the time now. He is very enthusiastic about the stories and is learning the verses faster than I expected.

Chanler started a gym class this morning. OK I actually signed him up for a class through the city a few weeks ago, but after the first class I was so disappointed that we had to find a real class for him.

So, Scott took him to a parent tot class this morning as a trial and Chanler loved it (well most of it at least.) He got to run, toss, jump, hang, climb, roll, balance, and get many drinks of water. It was pretty much just what I was looking for – well except I would rather have a weekday class over a Saturday class, but hopefully they will expand their schedule soon (only need one more family for Fridays!)

Chanler’s newest talent after the class it the “stick” pose i.e. what you do when you land or want to stop jumping. It is hilarious – if you say stick he will bend his knees and stick his hands into the air, all the while grinning. 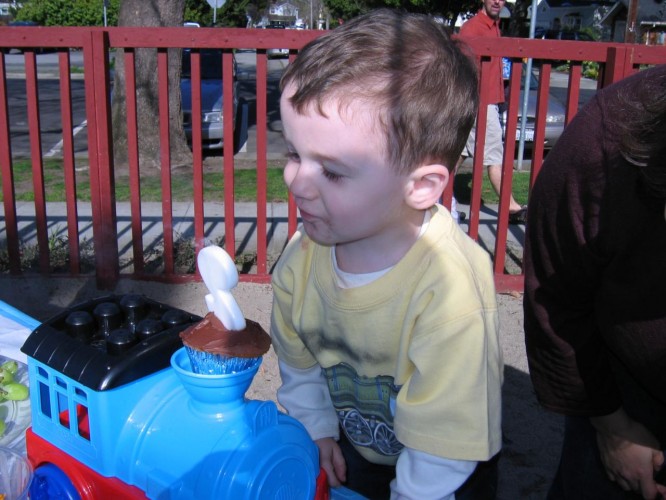 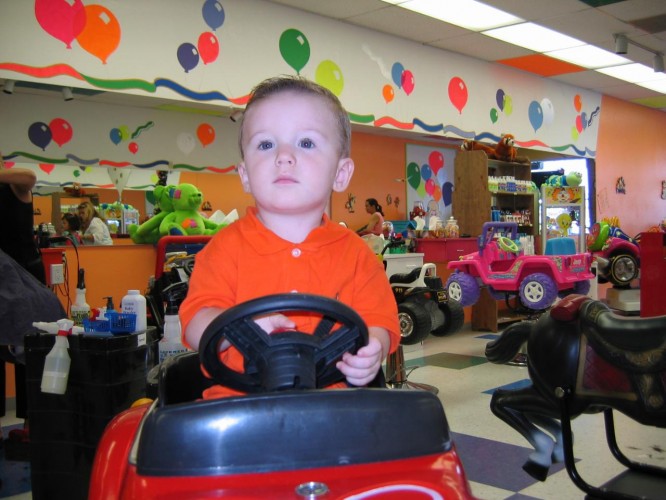 No it is not your imagination – he did not grow up over night – he just got his first “real” haircut. I have been trimming his neck and sometimes bangs, but I just didn’t know what to do for an overall haircut. So I succumbed to paying $17 to get his hair cut at a kids specialty place. I must say it was worth it! Chanler didn’t mind any of the tools or even notice that his hair was being cut. It is probably due to the race car seat he got and the GIANT screen TV that was playing cartoons the whole time. 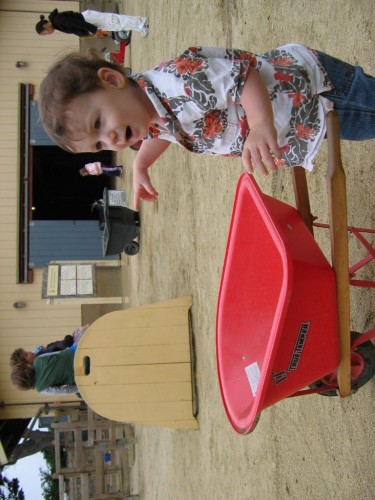 Mothers Together took a trip to the SF Zoo today and since it was Grandmama’s Birthday we decided to make a SF day of it. Chanler LOVED the zoo, especially the kids zoo. They had a petting zoo (not his fav), mini farm equipment, and Prairie Dogs all down at his level. It was a blast!

It took almost a year, but Dan and Mary finally got Great Grandma Blomqusit out to CA for a visit. She spent the whole weekend (Friday thru Tuesday) playing with Chanler and trying to get him to give her a hug. She also brought Chanler a popper toy – it is the same one that I remember playing with when I was a child and the toy that Chanler grabs any time with go to another house that has one – He was in heaven.

Here are a few more pictures

I have this feeling that is all I am going to be able to think about for the next few days. What a trip – I was on my way to the hospital for a check up about now and had no idea that tomorrow would be my little boy’s birthday. And now he is turning one – where has the year gone?

Well, I can’t say for sure when Chanler took his first step without support (there have been a few occasions when Scott and I looked at each other and said “was he holding on?”), but I can officially say he can walk as of now. He doesn’t go more than a few steps at a time, but he has figured it out.

We had Chanler dedicated tonight at our church (MPPC) by the pastor that leads our couples group (and wants to be Chanler’s adopted grandma) Joanie Tankersley. After we celebrated with family and friends at Buca di Beppo in Palo Alto.

Chanler’s wonderful outfit was made by his Grandmama Hraban, because the one Jesse wanted to get was not available – Isn’t it a cute suit!! and amazingly enough Chanler did not spit up on it until after the service was over =].